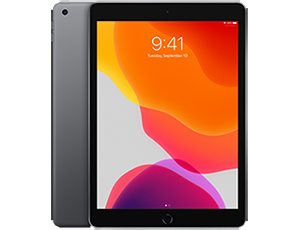 Apple's latest consumer iPad was released on September 25, 2019, and was the first to feature a larger screen size. Rather than the 9.7-inch screen of every non-Pro iPad since the first, this version has a 10.2-inch screen. The larger screen is made possible by a reduction in the bezels around the display, meaning that the iPad features almost the same physical case size. The iPad also adds the ability to use an Apple Smart Keyboard.

The 10.2-inch iPad is the workhorse of the range, keeping or updating the essentials that all iPad users benefit from, but eschewing some of the more advanced and costly elements of the iPad Pro. So rather than Face ID, it retains Touch ID, and battery life is the same 9-10 hours per charge.

It also runs on the same A10 Fusion chip that the previous iPad did, and most of the specifications beyond the screen size are also the same. So there's a maximum capacity of 128GB, and in our testing we found its brightness was around 482 nits.

There's no difference in the cameras, which means this iPad has an 8-megapixel rear camera and a 1.2-megapixel front one.

The difference is in the screen

The most significant difference between the 2019 iPad and its predecessor is the screen, but there's more to it than a larger size display. In the way it has increased the screen from 9.7-inches to 10.2, Apple has not stretched out the old display's resolution to a larger canvas. Instead, both iPads have a Retina resolution of 264ppi.

That previous model did feature full sRGB, which the 2019 iPad lacks. The new iPad also keeps the non-laminated screen of its predecessors, which means the display is not as thin as in the iPad Pro. However, it should also mean that repairs are easier and therefore cheaper than with the laminated iPad Pro models.

Everything that you could use with the previous model, such as Bluetooth keyboards or the first-generation Apple Pencil, can still be used with the new iPad. However, for the first time you can also use an Apple Smart Keyboard with it.

The 10.2-inch iPad is not quite identical in case size to its predecessor, but the difference is minute. The new model is 0.4 inches higher, 0.2 inches wider and has exactly the same depth.

There's also a difference in weight, but, again, it is too small to be significant. The new Wi-Fi-only model is 0.04 pounds heavier than the previous version, for instance.