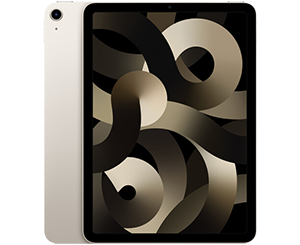 The iPad Air 5 made its debut on stage during the March 8, 2022 "Peek Performance" Apple Event. It retains a similar form factor to its predecessor, but it's been beefed up considerably with Apple's M1 chip. Its new 8-core CPU offers a 60 percent boost to performance, and its 8-core GPU bolsters its graphical performance to make it twice as fast as the iPad Air 4. The new iPad Air 5 also features a new Ultra Wide 12-megapixel camera with Center Stage, a feature that automatically pans to ensure users are in view while moving around. It retains the same 12-megapixel rear camera as the previous iPad as well. It's available in Space Gray, Pink, Purple, Blue, and Starlight color options in your choice of Wi-Fi Only or Wi-Fi + Cellular connectivity. Retail iPad Air 5 pricing starts at $599 and tops out at $899, with the best iPad deals offering double-digit and triple-digit discounts on the iPad range.